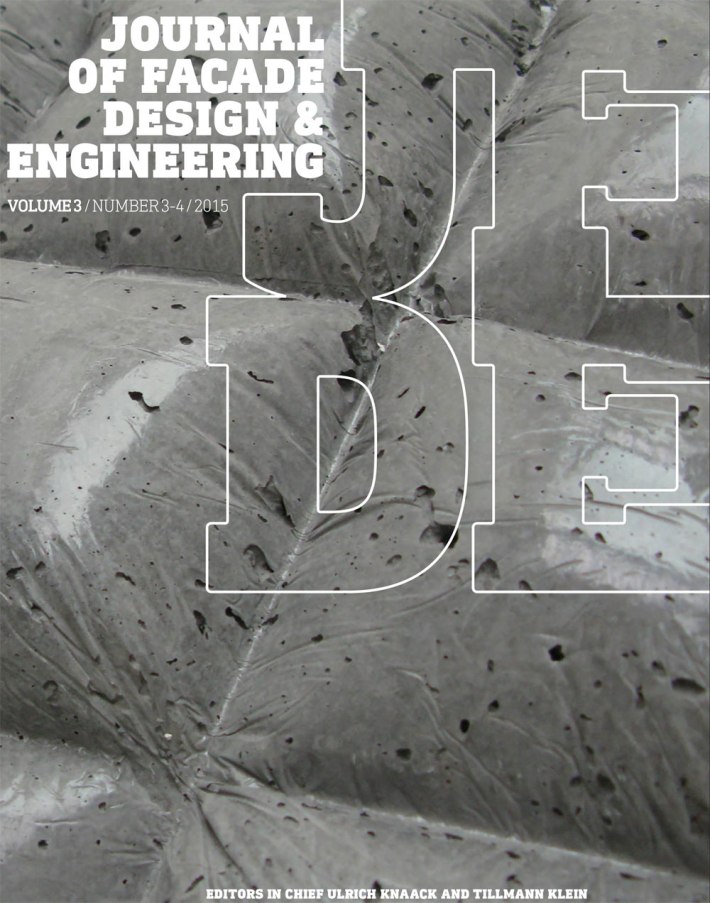 /// Journal of Facade Design and Engineering | Facade Design and Engineering – Vol 3, No 3-4 (2015)
With the volume 3 / 2015 we are proud to announce that we have officially completed the NWO funding period by successfully establishing the Journal. For three years JFDE has been supported by the Open Access Fund of the Netherlands Organisation for Scientific Research NWO (www.nwo.nl). We have been able to publish 40 papers in the first three volumes. That is slightly less than we have hoped but the numbers have steadily increased to 19 papers in volume 3 alone.
We would like to thank NWO for the support. The funding allowed us to cover a large part of the publishing costs. Still, the TUDelft and our publisher IOS Press have invested a lot of time and money in the Journal. But without the support it would not have been possible to establish JFDE.
Especially that JFDE became indexed by the Directory of Open Access Journals DOAJ during the funding period, is a great success for JFDE. DOAJ is a membership organization with the aim to increase the visibility and ease of use of open access journals and is co-author to the Principles of Transparency and Best Practice in Scholarly Publishing. With the indexation, DOAJ acknowledges our commitment to quality, peer-reviewed open access publishing.
Based on this we can now prepare for other indexation possibilities and we are also working on securing the funding for the coming years. There are two challenges we face: our discipline of facade design and engineering is scientifically relatively young and the possibilities of new publishing concepts, which include author-fee principles only slowly get acknowledged. Therefore, one of the tasks of JFDE is to lobby for scientific OA publishing in a field that is located right between science and applied practice.
Tillmann Klein, Ulrich Knaack