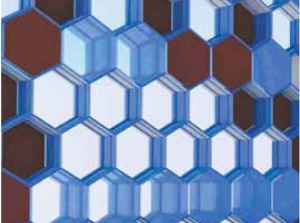 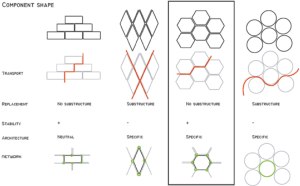 This scenario is based on the idea that the façade itself does not have an independent load-bearing structure but consists of equally shaped interconnected components.
The results of a form study showed that the optimum shape for such a component is a hexagon. In nature, we find hexagons in honeycomb structures that contain maximum amounts of honey with minimal amounts of beeswax.
The assignment of the functions and components is described in a diagram. In a simplified manner, the diagram shows the assignment of a selection of functions to components, and the interfaces between them. In principle, each of the components can fulfill a different function. All of them, however, fulfill the structural function.